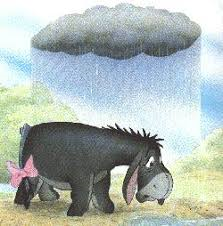 It took me almost 40 years to get a dog AND a man that won’t run as fast as they can to get away from me first chance they get. For those of you who know my men and previous dog stories, you know what I mean! With men, this has usually been when I’ve stood up for myself. But, now I have BOTH and I thank the good Lord!

When I think and frankly expect either one of them to turn tail and run, they both look at me with those puppy dog eyes, as if to say “Where would I go?” “Why would I leave?” “I want to be right here….with you.”

This is new for me. On both accounts and it feels really nice. I’m used to feeling not good enough, too much, too little, and ultimately second choice. But, I have a very strong feeling, there’s nowhere else either one of them would rather be. And, I am so thankful!

I’ve been told I have a dark cloud that follows me. No matter the thunder, tears, lightning, or circumstances, these two would rather be with me in any weather than without. I’ve experienced rain that no umbrella can withstand. I have stood up where necessary, I have let my guard down, and I have been given the beautiful opportunity to love all over again. What a gift!

I thank God for the people (and puppy) He has sent me who love me enough to never let me or want me to get soaked alone again. Dark clouds or sunshine, they are with me.